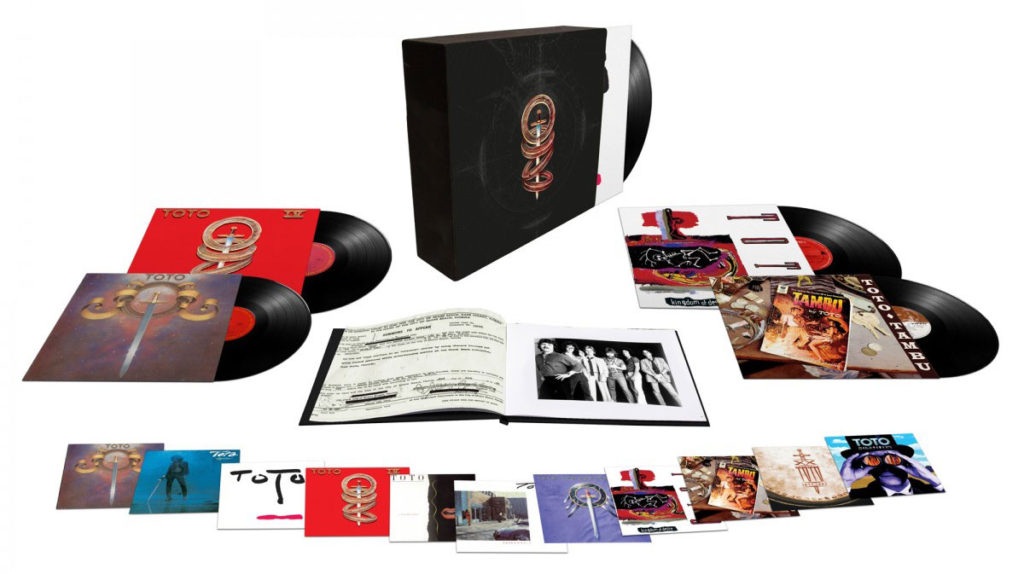 TOTO is pleased to announce the release of their definitive box set: All In via Legacy Recordings (a division of Sony Music).  This limited edition release is available beginning today for pre-order here:  http://SMARTURL.IT/TOTO40TRIPSBOXSET

This limited edition vinyl All In set will not be made available in retail stores and is only available to purchase until April 10th.  All orders will ship this fall.

All In features the following TOTO albums on seventeen LPs and thirteen CDs:

The set also includes a previously unreleased Live In Tokyo EP from their 1980 tour, along with an album titled Old Is New.

The Old Is New LP features ten tracks, seven are previously unreleased along with “Spanish Sea,” “Alone” and “Struck By Lighting” which are featured on the band’s new greatest hits collection 40 Trips Around The Sun.  All of the music in the box set was personally remastered by TOTO along with Elliot Scheiner.

A Blu-Ray which includes:

Also included in the box set is an 80-page hardcover book which includes new essays, and previously unseen photos.  All box sets will include a numbered 8″x 8″ certificate of authenticity personally signed by the band.

A CD version of the All In box with just the albums will be made available later this year.

TOTO’s brand new Greatest Hits package titled 40 Trips Around The Sun was released last week and is impacting charts all over the world.  The band is currently in the middle of an extensive European tour with multiple dates already sold out across Europe.  The 40 Trips Around The Sun tour will be the band’s most extensive run in years and is expected to hit the U.S. this summer. More shows will be announced shortly.

Few ensembles in the history of recorded music have individually or collectively had a larger imprint on pop culture than the members of TOTO.  As individuals, the band members can be heard on an astonishing 5000 albums that together amass a sales history of a half a billion albums.  Amongst these recordings, NARAS applauded the performances with more than 200 Grammy nominations.  Toto has over 400 million streams on Spotify alone along while views on YouTube far exceed over a half billion.